The Covid-19 pandemic has brought devastation to millions around the world, disrupting many parts of the global economy. During this time, governments have stepped up to protect our lives and livelihoods. However, climate change continues to be an increasing threat to our planet. Around the world unpredictable weather such as storms, floods and wildfires are intensifying and increasing air pollution affects tens of thousands of people. Although the impacts of climate change are catastrophic there have been many advances in tackling this issue. With less than 60 days to go until COP26 it’s time to start a conversation and raise awareness of the environmental issues facing our planet.

The UK will host the 26th UN Climate Change Conference of the Parties (COP26) in Glasgow on 31 October – 12 November 2021. This event will allow global world leaders to work together and take action against climate change to protect and restore our forests and critical ecosystems towards a more sustainable future.

Below we share some of our favourite books for both adults and children, covering a range of meaningful topics about nature, including green technology, environmental activism, and the sustainability of renewable resources. 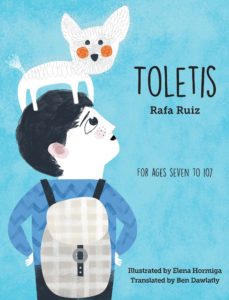 Did you know spending time outdoors can actually improve your physical and mental health, combat illness, and make you happier?

Recent studies have shown the tremendous benefits of spending time in nature, for both children and adults. This research indicates that kids who play outside are smarter, happier, more attentive, and less anxious than kids who spend more time indoors. Some other benefits suggest nature builds confidence, promotes creativity and imagination, it teaches responsibility and it also helps get kids moving around. Toletis by Rafa Ruiz encourages its readers to become acute observers and engage with the natural world around them; it’s the perfect antidote to smart phones and computers!

The trees and grass are disappearing to make way for a new section of road. Toletis, his dog Amenophis, friends Claudia and Tutan are on a mission to find ingenious ways of replacing them and turning their little valley town, set deep in the mountains, lusciously green again. The odds are stacked against them. Can they succeed… with some very unusual help? A deep appreciation for nature, art, language, music, friendship, family, the passing of time, old age, loneliness, and the importance of sitting still and reflecting on life, pervade this exquisite story.

This story is accompanied by gorgeous illustrations and has been used in schools for teaching descriptive and figurative language, art and crafts (with students exploring different media inspired by scenes from the book), and environmental awareness classes.

“The values contained in the pages of love for the outdoors, animals and plants, friendship, family, being in touch with your emotions -make the world a better place. If you believe that the best hope we have for a safe, peaceful planet is to teach children to love the environment and one another, then I recommend that you read Toletis with the children in your life.” – Green World

A journalist and author who has a staunch commitment to culture, art and the environment, and the majority of his career has been focused on these three topics. He spent 10 years at Spanish newspaper El Pais and 15 years at their weekly supplement. He has written numerous children’s books and he co-directs the Mad is Mad art gallery in Madrid which gives a space to up-and-coming artists. He is also one of the partner-founders of the Press Association for Environmental Information (APIA).

The Umbrella Men by Keith Carter 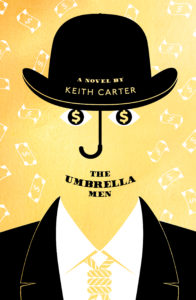 You’ve probably never heard of rare-earth metals yet they have insinuated themselves deep into everyday life – in ways of which most of us are completely oblivious. For example, if you are reading this article on your smart phone, did you know you’re contributing to the consumption of rare earth metals?

What are rare earth metals?

The term “rare” doesn’t necessarily mean in short supply, but they aren’t plentiful either – they’re spread out in many different places on the planet, and extracting them can be hazardous and time-consuming. The mining and manufacturing processes also have very real environmental consequences such as despoiled nature, widespread pollution and serious health and wellbeing damage to workers and neighbours.

Rare earth metals, the contradictions of the clean energy economy and their unintended consequences on everyday people are just some of the themes Keith Carter highlights throughout The Umbrella Men; a witty and acerbic novel for our times about corporate greed and the hubris of bankers.

Finance, environmentalism, rare-earth mining and human frailties collide in a complex of flawed motives. We follow Peter Mount, the self-made Chief Executive of a London-based rare-earth mining company as he and his business are buffeted by crisis-torn Royal Bank of Scotland and by his own actions, real and imagined. Meanwhile in Oregon, Amy Tate and her group of local environmental activists do their contradictory part to undermine a component of the green economy, unwittingly super-charged by the Chinese state. The repercussions of events in pristine Oregon are felt in the corporate and financial corridors of New York and London with drastic consequences. This is a deeply involving novel about the current workings of capitalism, miscommunication, causes and unexpected effects, love and survival.

“A highly entertaining romp that very accurately portrays the conflicting objectives and modus operandi of groups of investment bankers, hedgies, environmentalists and a small rare earth mining company as they each try to maximise their own positions, and with abundant human frailties on show.” – Waterstones Reviewer

Born in Scotland, he read Economics at Cambridge, taking a First in 1981 when he was elected a Scholar. He worked as an investment banker before going straight and running a small pharmaceutical company. Now a writer and business consultant he enjoys travel, politics and economics, reading and writing, languages, music and meals with family and friends. Keith suffered a spinal cord injury in March 2018 and since rides a wheelchair.

For more information on Rare Earth Metals read the articles below.

Our smartphone addiction is costing the Earth | TechRadar

The wonderful team at @publishing_post spoke with