The Books You Should Read For Women In Translation Month! – August

August is Women in Translation Month (#WITMonth) – an annual celebration (which, if we’re being honest, might as well be yearlong for Neem Tree Press) of literature written by women that has been translated from a different language into English. The celebration started back in 2014 by book blogger Meytal Radzinski (@Biblibio) after she began to notice the lack of translated titles by women on her bookshelves. Radzinski grew up bilingual speaking both English and Hebrew, and her family often encouraged her to read literature in translation.

According to an interview from The American Literary Translators Association, Radzinski wants to “hold publishers more responsible for parity in what they choose to publish.” However, she also says that “the problem [with translated literature written by women] definitely goes back further.” She goes on to say that “just about every step of the pyramid has its problems, from translator bias (men translating fewer women, according to Women in Translation) to a general lack of reviews and publicity to gender bias in other countries” but overall responsibility lies everywhere.

At Neem Tree Press we are dedicated to the enthusiastic discovery of both British and international literature that will change and broaden perspectives, we are truly global in scope and have a number of titles under contact from across the world.

This month is the perfect time to discover new independent authors and we’d love to encourage and challenge readers to seek out translated texts by women. For our blog today, we’ve bought together a selection of titles written and/or translated by women that we have published and are available in store or online right now! 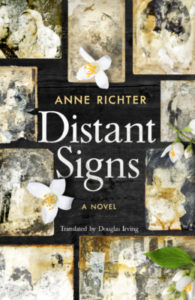 Distant Signs is an intimate portrait of two families spanning three generations amidst turbulent political change, behind and beyond the Berlin Wall.

In 1960s East Germany, Margret, a professor’s daughter from the city, meets and marries Hans, from a small village in the Thuringian forest. The couple struggle to contend with their different backgrounds, and the emotional scars they bear from childhood in the aftermath of war. As East German history gradually unravels, with collision of the personal and political, their two families’ hidden truths are quietly revealed. An exquisitely written novel with strongly etched characters that stay with you long after the book is finished and an authentic portrayal of family life behind the iron curtain based on personal experience of the author who is East German and was 16 years old at the fall of the Berlin Wall.

Writer and poet Anne Richter was born in 1973 in Jena, in the former German Democratic Republic. Her degree in Romance languages and English included study periods in England, Italy and France. Since 2003 Anne has lived with her daughter in Heidelberg, where she combines her writing career with teaching German as a second language.

Douglas Irving was born in Scotland in 1972. He studied German and Spanish at Aberdeen University, then in 2014 completed a Masters in Translation at Glasgow University. His first translation, Crossing: A Love Story – a later work by the great German writer, Anna Seghers – was published in 2016 in the US to positive reviews. His translation of Anna Seghers’ last work published in her lifetime, Three Women from Haiti, is set to follow. Another translation, Distant Signs, the debut novel by German writer Anne Richter, will appear in the UK in 2019.

Why East Germany was for lovers | Sleek Magazine

Why young eastern German voters support the far-right AfD | Germany | News and in-depth reporting from Berlin and beyond | DW | 11.06.2021

The dark side of German reunification | Germany | News and in-depth reporting from Berlin and beyond | DW | 21.09.2016 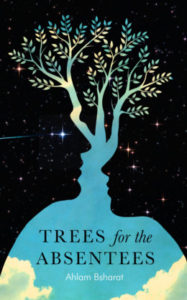 Young love, meddling relatives, heart-to-hearts with friends real and imagined – Philistia’s world is that of an ordinary university student, except that in occupied Palestine, and when your father is in indefinite detention, nothing is straightforward.

Philistia is closest to her childhood, and to her late grandmother and her imprisoned father, when she’s at her part-time job washing women’s bodies at the ancient Ottoman hammam in Nablus, the West Bank. A midwife and corpse washer in her time, Grandma Zahia taught Philistia the ritual ablutions and the secrets of the body: the secrets of life and death.

On the brink of adulthood, Philistia embarks on a journey through her country’s history – a magical journey, and one of loss and centuries of occupation.

As trees are uprooted around her, Philistia searches for a place of refuge, a place where she can plant a memory for the ones she’s lost.

Click for information on Trees for the Absentees: https://neemtreepress.com/book/trees-for-the-absentees/

Ahlam Bsharat is a Palestinian novelist, poet, and children’s author, as well as a teacher of creative writing. She is a prominent and highly regarded author of YA novels in the Arab world, and her books have met with great success at the local and international levels. They have been included in IBBY lists, shortlisted for the Palestine Book Award (UK) and Etisalat Award for Children’s Literature (UAE). Two of her novels, Code Name: Butterfly and Trees for the Absentees, have been translated into English and her most celebrated recent Arabic YA novels are: “مريم سيدة الإسطرلاب ” Maryam Sayida al-Astrolab ,“جنجر” Ginger and “مصنع الذكريات ” Masna’ adh-dhikariyat.

Ruth Ahmedzai Kemp is a British literary translator working from German, Russian and Arabic into English. Ruth graduated from the University of Oxford in 2003 and completed an MA in Translation and Interpreting at the University of Bath.

Sue Copeland is a British translator working from Arabic, French, Italian and Spanish into English. She enjoys translating fiction and non-fiction, particularly that associated with human rights and refugees. 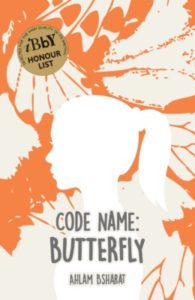 With irony and poignant teenage idealism, Butterfly draws us into her world of adult hypocrisy, sibling rivalries, girlfriends’ power plays, unrequited love…not to mention the political tension of life under occupation. As she observes her fragile environment with all its conflicts, Butterfly is compelled to question everything around her.

Is her father a collaborator for the occupiers? Will Nizar ever give her the sign she’s waiting for? How will her friendship with the activist Mays and the airhead Haya survive the unpredictable storms ahead? And why is ‘honour’ such a dangerous word, anyway?

Ahlam Bsharat is a Palestinian novelist, poet, and children’s author, as well as a teacher of creative writing. She is a prominent and highly regarded author of YA novels in the Arab world, and her books have met with great success at the local and international levels. They have been included in IBBY lists, shortlisted for the Palestine Book Award (UK) and Etisalat Award for Children’s Literature (UAE). Two of her novels, Code Name: Butterfly and Trees for the Absentees, have been translated into English and her most celebrated recent Arabic YA novels are: “مريم سيدة الإسطرلاب ” Maryam Sayida al-Astrolab ,“جنجر” Ginger and “مصنع الذكريات ” Masna’ adh-dhikariyat.

Nancy Roberts is an Arabic-to-English literary translator who also translated Salwa Bakr’s The Man From Bashmour, for which she received a commendation in the Saif Ghobash-Banipal Prize for Translation.

We are also in the process of publishing two international literary translations written by women. The first will be a fiction book written by Doina Rusti, translated from Romanian into English. The Book of Perilous Dishes won a ‘major grant’ from the Romanian Cultural Institute.

Doina Rusti is one of Romania’s most successful writers of historical and speculative fiction. Rusti is the recipient of many major Romanian awards, and her books have been translated into multiple languages. She is known for exploring aspects of fantasy and the supernatural,

The second book is a Young Adult Algerian crime novel written by Djamila Morani and translated by Sawad Hussain from Arabic into English. This book won a prestigious English PEN Translates grant and features a strong female protagonist who breaks cultural and historical stereotypes.

Djamila Morani is an Algerian novelist and an Arabic language professor. Her first novel, released in 2015 and titled Taj el-Khatiaa, is set in the Abbasid period, but in Kazakhstan. All of her works are fast-paced historical fiction pieces.

Sawad Hussain is an Arabic translator and litterateur who is passionate about bringing narratives from the African continent to wider audiences. Her translations have been recognised by English PEN, the Anglo-Omani Society and the Palestine Book Awards, among others.

We hope that’s given you some ideas for #WITMonth.